It's my stop on the 'Would Like to Meet...' blog tour. This book looks super exciting and fun to read. I've got a extract from the first chapter to persuade you to go out a buy it! 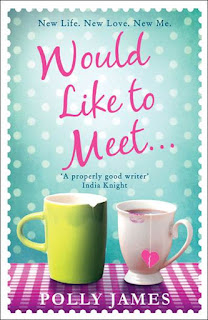 It’s all the fault of the half-naked teenagers, or most of it, anyway. They’re staggering about drunkenly on the TV screen, and Dan is staring at them as if his life depended on it.
“What the hell are you watching?” I say, as I come into the room bearing two mugs of extra-strong coffee to help prevent the hangover we’ll otherwise be doomed to have.
It’s 12:30am, and we’ve been drinking geriatric drinks all night: Aunt Pearl’s way of thanking us for moving her belong­ings into her new retirement flat during the day. I don’t think port and lemon agrees with me, and it certainly doesn’t agree with Dan. It’s given him short-term memory loss, judging by the fact that he completely forgot to wish me a happy New Year when we heard Big Ben strike twelve on the radio, in the taxi that was bringing us home.
Once we arrived, Dan got out of the car, unlocked the front door, and then headed straight for the sofa like a homing pigeon. One with opposable claws for operating remote controls, and a tendency to go deaf whenever wives ask awkward questions.
I try again.
“What is this programme, Dan?” I say.
“God knows,” he says, taking the mug I pass him without moving his eyes away from the screen. “Brits in Ibiza, or something like that.”
He must be able to sense my expression, as then he adds, “Probably the channel Joel was watching before he went out tonight.”
It’s so useful having a supposedly adult son still living at home whenever you need to pass the buck. I doubt Joel would be caught dead watching this idiotic programme, not when he can view similar scenes any night of the week when he’s out clubbing – and in the flesh, as it were. God, there’s a lot of that on this TV show.
I shift about in my seat, suddenly uncomfortably aware of what I’m now wearing: mismatched pyjamas, to go with my rather less mismatched face and arse. They say either your arse can look good after the age of forty, or your face, but never both. When you get as close to fifty as I now am, both are past their sell-by date.
“I can’t see the appeal of half-naked teenagers, myself – not since I stopped being one,” I say. “Especially not when they’re vomiting everywhere like this lot will be in a minute. Isn’t there anything better on?”
Dan doesn’t reply. You’d swear he’d been watching this programme for at least the last two hours and it was about to reach a thrilling climax, given how hard he’s concentrating. I repeat what I’ve just said, and then I wave at him across the room, but he doesn’t react, and then I feign a coughing fit. Still no response whatsoever – none – so I pull off one of my slipper socks and throw it at him.

Don't forget to follow the rest of the tour. 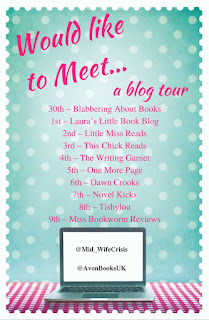 The bestest books ever